Vegetables and meat prices set to rise substantially in 2016: report

Manitobans will be spending hundreds of dollars more on groceries in 2016, according to the University of Guelph’s Food Price Report.

The price of meats and produce is set to rise the fastest, between 2.5 and 4.5 per cent, the national report projects.

Not long ago, a head of cauliflower used to sell for between $3 and $4, said Zeid. Now the vegetable sells for $8 when it’s not on sale. 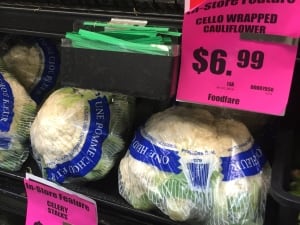 “Instead of us selling a couple cases a week or maybe three cases, now we’re selling maybe one [or] sometimes half [a case] and the other half we’re reducing or just chucking in the garbage,” he said.

“If you’re low income … you either stop eating something or you stop a meal and make sure your kids eat three meals and you eat only two meals that day,” said Northcott.

Donations to Winnipeg Harvest tend to slow down after Christmas and Northcott expects an increase in reliance on the food bank, which distributes produce from Peak of the Market, in 2016.

Winnipeg resident William Thompson lives on a fixed income said he’s coping with the higher prices by purchasing more food in bulk and cutting back on red meat.

“It’s sure hitting the pocket book,” he said, “I have to budget myself weekly.”

For seniors and baby boomers reaching retirement age the situation is a “ticking time bomb,” he said.

“We’re trying to put the Band-Aid on as best we can.”